I have a co-founder!

It's taken a long time but is totally worth the wait

The conversation that started it all, back in December 2018

I’ve been a nightmare for the last few weeks. I’m dotting around, tweaking UI one minute and stressing about the future the next.

I just spent a week in France, supposedly on holiday but actually fretting about what felt like a fundamental, existential decision between two irreversible paths. The sheer weight of the number of decisions to make across product, go-to-market, team and personal cash-flow had (and still has) me in a real mess.

Honestly a lot of the 18 months since having a real job has been spent thinking is it meant to be this fun?

But now with real customers paying real money, clear evidence that we’re still pre ‘product-market fit’, a user experience which is nowhere near the quality I want and the ever-dwindling bank account, the pressure overwhelms me on the reg.

I feel like I stare at that trello board moving things back and forth, starting eight things at once before peering out of the window worrying about a ninth.

I know my thinking is scattergun, and jumps all over the place. I see it as a strength, but it destroys my focus when I’m unclear on which direction I need to run.

Days like today are exactly when I needed someone to straighten me out. Someone who shares the risk, has skin in the game, but is able to think through problems in a different way to me.

Luckily I now have a co-founder, Neil.

I met Neil on a slack channel for bootstrapped business in London at the end of last year having had various conversations and dalliances with other potential co-founders with no success. I was looking for someone who:

It turned out Neil lived a 10 minute cycle from me, so after chatting online we met up in a local boozer for an initial pint date. Straight away we were swapping stories of past companies formed, dreams of working from anywhere and separating time from money. A great start.

We decided to work together part-time for a couple of months, with a back-up consultancy agreement to protect Neil’s time in case it didn’t work out. While we almost certainly could have improved the process, we tried to force conversations and processes around stress-testing both our hard skills and communication styles, producing various documents, agreements and other artifacts alongside shipping a bunch of code together.

(I’ve been asked by a few people to share some of those documents. Still on the to-do list, but I will do in time!) 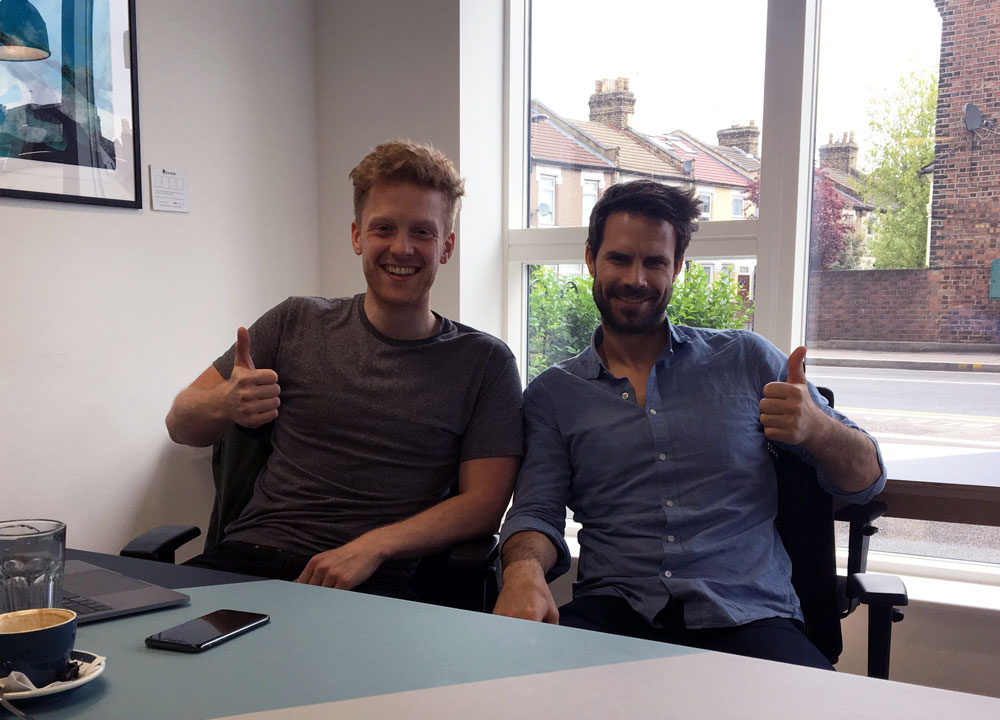 Moments after making Neil a founder. If we’re still smiling after a morning of contract wrangling, that’s a very good sign.

In no time it was the end of March, our agreed ‘shit or get off the pot’ time. After we’d both had a few last minute due diligence chats with people we trusted (thanks go to Mike, Alick and many more) we took the plunge.

I knew I’d made the right decision when – within a day – Neil had produced a financial model allowing us to plug in various revenue and growth numbers to see when we’d be able to earn some money (pretty scary actually).

For every attempt to derail meetings with new ideas, inability to concentrate on anything and wander off, Neil is shipping and calming me down. Plus it turns out his wife Vel loves Final Fantasy 7 even more than I do, so we’ll all take a group holiday when the remake comes out in March.

In the meantime the product has nipped along, we’ve found an office space together in sunny Leyton and started ramping up customers. More on that soon…

But for now, it’s not just me!

You can follow Neil on twitter here and I’ll get him on the podcast very soon too.