Goldie, aka Clifford Joseph Price, can safely list amongst his achievements: DJ, producer, actor, reality star (x4), and for the longest part of his career, artist. Both product and founder of the early nineties Jungle and Drum ‘n Bass scene, Goldie rose to fame partly through his pioneering ‘timestretching’ technique and partly due to his more structured classical-esque approach to music-making, allowing his 1995 album Timeless to help progress the genre beyond its previous confines of rave material to a more respected art-form. The title track is a 21 minute epic that literally ebbs and flows like a symphony. (He later blew that out of the water with 71 minute-long Mother, released 2 years later.)

This natural ability led him in 2008 to a second place in ‘Maestro’, the BBC’s orchestral conducting reality TV show behind The Great British Bake-off’s Sue Perkins, by far his most successful foray into reality TV. Other outings on Celebrity Big Brother (2002), Celebrity Mastermind (2009), Strictly come Dancing (2010) and Come Dine With Me (2010) saw him faring less well. He’s also appeared in several films including Guy Ritchies Snatch and Bond meh-fest The World is not enough as well as a two year stint in Eastenders. 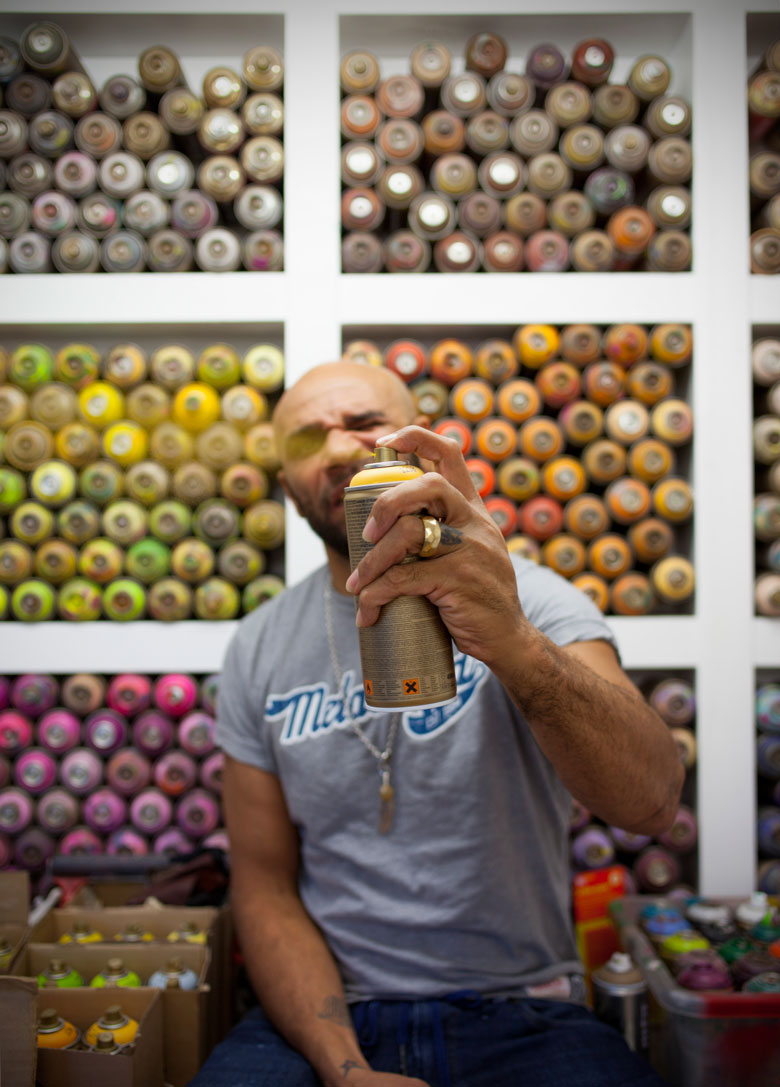 Goldie in his paint room

However, most importantly Goldie is also a fine artist.

I first met Goldie, bizarrely, because he wanted to buy a piece of tree off my dad. A storm had blown a large oak down in the churchyard of St Lawrence Church in Bovingdon, Goldie’s home village, and as the parish vicar my dad was in charge of removing the wood. Goldie successfully negotiated a slice and I went round to see what he was going to do with it. It turned out that it involved chainsaws.

Goldie the artist today has evolved from Goldie the graffiti artist of the 1980s. His graffiti work in Wolverhampton in the 80s took him to the US where he also started selling grills (gold teeth) in New York and Miami. This love of graffiti still pervades every element of Goldie’s work as well as his home - spray cans are still the central focus though are now tempered with raw wood, elemental and found objects, lots of varnish and even sculpture and photography. He recently sold a solid bronze and chrome skull – complete with gold teeth – to ginger strummer Ed Sheeran, turning down an offer from 1D fop Harry Styles in the process: ‘I didn’t even know who that guy was, but Ed and I are mates’.

It’s an objectively huge set of achievements to notch up in one career. But upon meeting Goldie it became immediately clear that this is a man driven to create to the point where he may never be able to stop.

I turned up at Goldie’s house with a camera and my laptop to see him bombing out of his drive in a white 4x4. A bit odd, I thought to myself - We’d texted each other only ten minutes before to confirm. Nonetheless I knocked on the door and ended up hanging out with his wife and daughter watching Cbeebies for 20 minutes while Goldie went to pick up his mate from the station. Suddenly he turned up, bouncing off the walls about the home-made salt fish fritters he’d been presented with and hugging his wife ‘I’m the luckiest man in the world, I swear’, before I managed to tie him down for long enough to take a few photos, all the while Goldie talking non-stop and me cursing the fact I hadn’t tuned on my recorder yet.

Finally, photos over, I managed to get him sitting down for a chat about the youth of today, harnessing creativity and where he gets his drive. 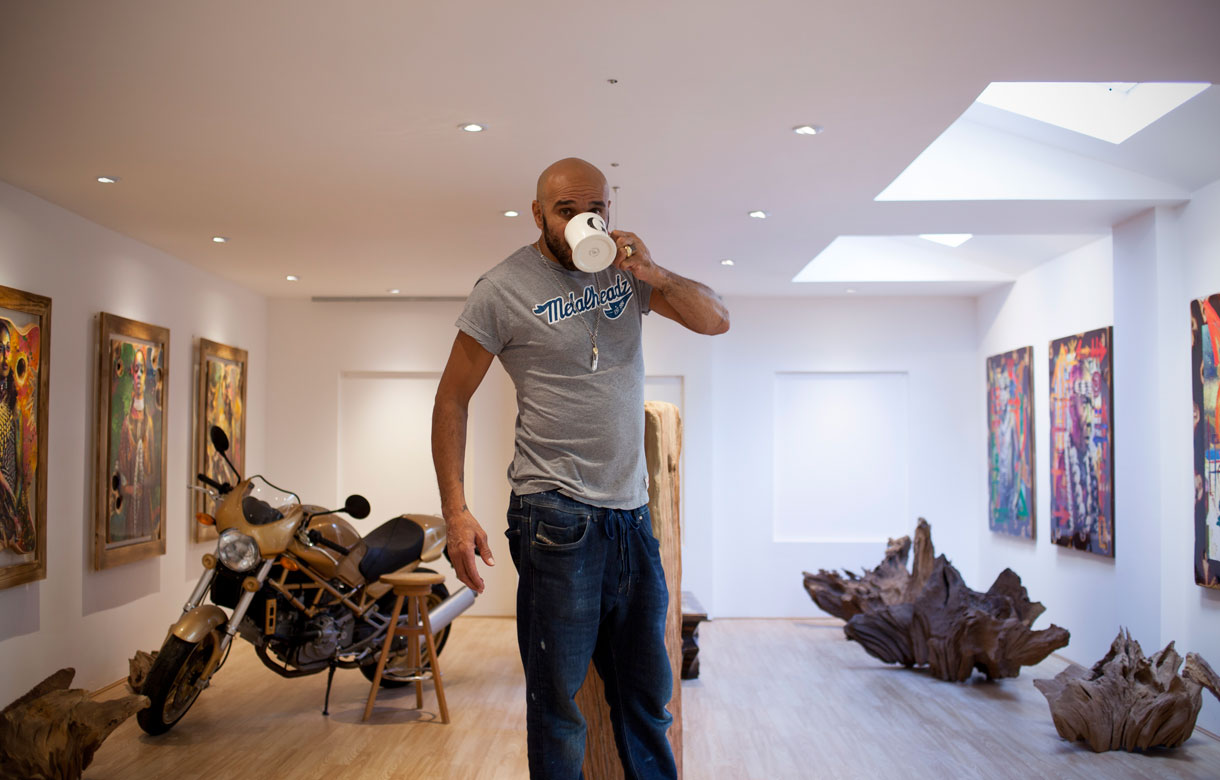 I was 9 when Timeless came out and our readership were still swimming around in their dads balls.

Left testicle or right testicle is determined by whether your dad was creative when he put it in there.

Apparently so. Obviously this generation is very different - the difference is that parents can sometimes become friends. Technology has folded time. Back in the 70s when we were sneaking out the fucking window and no-one knows any different with our parents knocking on the door ‘Are you there darling, are you there?’

It’s purely because a a generation very in touch, with social media and whatever. I remember looking at a picture of my dad, wearing a check plaid suit with his foot on a log, and I’m thinking ‘who is this black guy from the islands’ you know? And then I look at my daughter who’s 16 now asking if she can borrow my Stussy jacket.

When I was stealing paint at the humble age of 17, at least I had an appreciation for the amount of paint I had and what I’d gained for a period of 6 or 7 weeks, collating a quantity of pissy paint so I could do my next wall. No different than the schematics of making a record, waiting in line, cutting a dubplate, sticking a label on it, going to a club, queuing up to see Fabio or Grooverider, handing them the record, sitting on the dance floor waiting for it to get played. It didn’t the first week, it might have done on the third week.

It’s all fucking disposable now. We’re in a world of technology, but what’s tangible about it. Do you have a craft? If you close your laptop can you do anything?

If you were 18 again now, what would you start on?

I can tell you what not to do. All kids will do this, you’ll rebel, you’ll sniff your fingers, you’ll wank, you’ll chase the girl, all kids do that it’s what they do. The only thing that separates us from animals is a toilet door and some wallpaper. What you have to work out is how to be individual in a world where everyone’s the fucking same.

On monday there was that tube strike and I’d got to Highbury and Islington and it was like dead rising, like a video game. Everyone wants to eat each others faces off. The trolls are overground, they’re going mad! My thing is even though I’m part of this human race I don’t want to be a part of it. 15 years ago I wouldn’t even let you blink at me but now I work doubly hard to not eye everybody on the fucking train.

I would study fucking hard. I would try and make my abstract life make sense when everything seems the same. When was the last time you had a real conversation with your dad? When was the last time you talked to your mum or helped her cook? So what, you’re grown-up, you’ve got a pair of balls and you’re shafting some bird called Vicky? I spent my entire life in care so now I find ‘life’ really worth living. There’s not a day I don’t get up and have that drive.

Where do you think that comes from?

It comes from abandonment issues and being misunderstood. Duh, I chose Drum and Bass and graffiti. It was about trying to experience life as much as possible, the good and the bad of it.

But you could have been a businessman or anything. Why that?

I could have been a good fucking crime guy. When I was a kid I did some really bad things. I knew I was troubled, I knew I had issues from a really early age.

Watch good film. Watch good documentary. Make stuff. Close your laptop for fucking one day of the fucking week. Get out more. Go and climb a fucking hill. Go and punish yourself in the gym. Go and run around the block until your heart wants to burst out your fucking chest. Paint until it makes no fucking sense whatsoever. Write words that fucking even Iggy and Bowie in the 60s would be proud of. Be experimental. The greatest thing comes from experimenting, being part of the fucking experiment.

I’m not asking you to stick fucking knives in rabbits eyes. It’s about saying hey man, we’ve got to pick up the mess. I play to these kids and I think ‘hey you look sad’.

What about social media?

It’s the velvet claw. It feels soft and cosy but it’ll claw you to death. Keep it at arms length. I use it, I have 60 odd thousand followers but I don’t trust it. It’s not real.

I went to see this native Indian, I’ll never forget it. It’s stuck with me all my life, he said I have a bowl, I’ve got this gift in my bowl, and it’s my job to give this gift. With social media we take a lot but we don’t give much back. It scares me.

Yeah it’s called the ego, and people need to lose that very quickly. We’re all human, we all have 8 pints of blood and we piss and we shit. That’s why I do Bikram Yoga. If I was 18 and someone told me to do some Bikram I’d be there like a shot. It gets rid of all of that stuff.

I’ve done more work while doing Bikram than I have in the whole rest of my life. I’ve been a drug addict, it’s been all over the news. I’ve lost a lot of people, lost a few friends to that. Now I wake up every morning and I tell myself ‘I’m going to die’. So heaven is this, here right now. This moment, the light hitting my face, I’ve got smell, I’ve got touch. You know what hell is? Not being to remember any of it.

If a buddhist chants for 25 years or a priest goes into a church for 25 years, do they get to go to heaven? I don’t believe in that, heaven is now. So I think ‘what can I do to leave my mark today?’ Because there’s no tomorrow, no future. We create tomorrow today.

Have you ever found that theres been something you haven’t been as good at as you’ve wanted to be? How do you deal with it?

Yeah, ironically I could never read music. But it made me want to make music even more.

Was there a moment of realisation?

Yeah dyslexia. I’ve never been able to read well, I used to have to hold a ruler firmly under the line I was reading just to do it. I’d read books and read the same paragraph over and over again. But I like that because it meant I had to do it differently.

I think this may be a made up word but I use a Seancic method with music, pulling it vicariously through others. Like a seance, I work with engineers and puppeteer the music together. 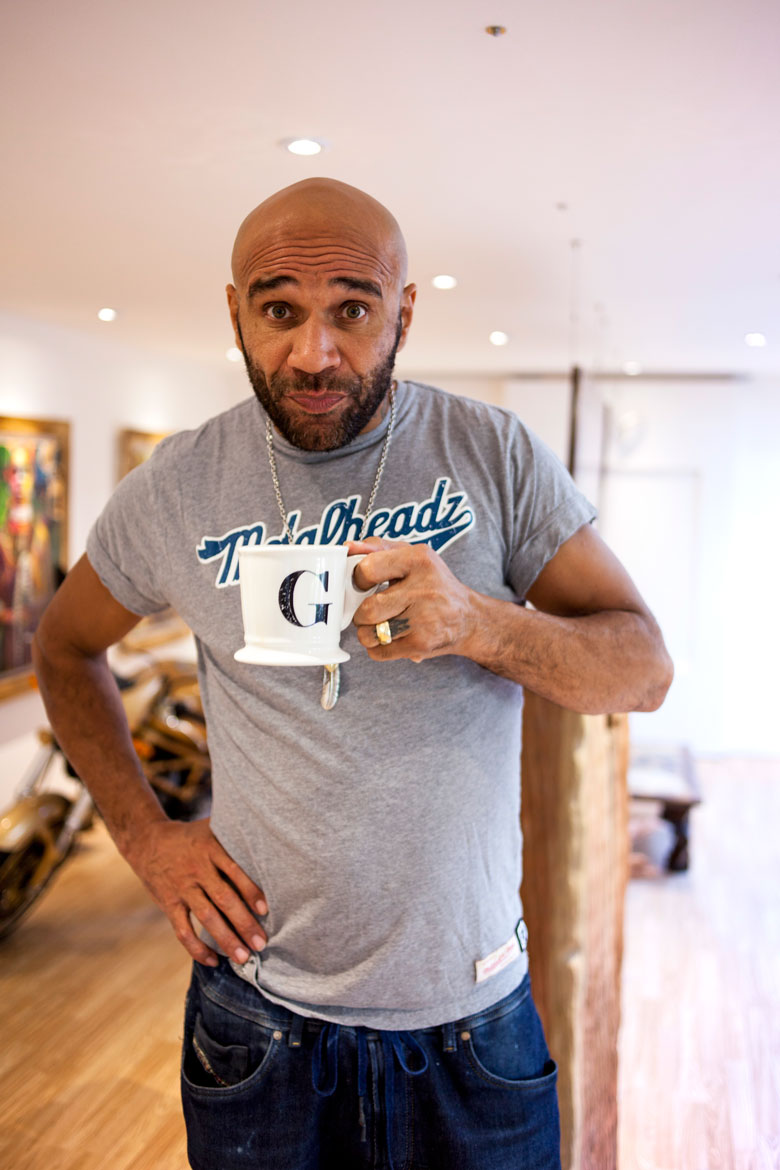 Lots of cups of tea

Bikram yoga, carving wood, walking my dogs and going out and playing music. I’m going to Misk in Russia, I go and play for hours, I don’t look at my watch, I play until they’re done. And experiencing life.

Yeah, Timeless is being orchestrated! It’s going to be for the Melt Festival at the Royal Festival Hall. No-one even knows about it yet but we’re working on it now. It’s been in the planning for a while but it’s finally going to happen.

And suddenly Goldie’s off on his next adventure. Who knows what it will be.

You can get info on everything Goldie online at www.goldie.co.uk. I strongly encourage you to also listen to Timeless on Spotify or the internets somewhere, it’s a journey.

1. A prediction by engineer and co-founder of Intel Gordon E Moore, who claimed that the number of transistors in electrical circuits (and therefore the power of technology) would double every two years. It has so far more than come true.