It's really Nice That

Every issue of ShellsuitZombie we interview a talented duo while playing a pub game. Having played darts, pool and, ahem, ten pin bowling, the logical next step was ping pong.

Grasping our bats were Will and Alex from It’s Nice That. Two 2008 Brighton grads, this duo now run a media empire with 26 employees, a magazine, a monthly readership not far off half a million people worldwide and their own design agency INT works. Not bad eh. Arseholes.

So, with sweaty brows, tight grips and intense glares, the boys began their epic battle – Alex starting off the scoring with a slightly pathetic serve. No-one would realize until later just how important this match would be for everyone present.

So who started its nice that?

WH: I started it as a response to a university brief. No grand plan, just trying to get a good degree really. It was a great way to remember peoples names and documenting the people who’s work I was looking at anyway.

We were working on a project called ‘If you could’ at the time while at Brighton. We were having all these conversations with creatives that we liked the work of at time. But then we graduated and got proper jobs. It was the January after that, January 2009, that we say It’s Nice That officially started.

AB: Yeah that’s when I got properly involved.

It quickly transpires that my questioning isn’t helping Will’s concentration. With every sentence he’s bleeding points, going down 4-0 almost immediately.

Wait so when were you guys Hudson Bec?

AB: Before that, but It’s Nice That was getting so much more traction that we eventually decided to put it all into that. At that point I was still doing illustration, Will was still freelancing and we made the decision to go 50:50 and put all our freelance into that one bank account. If one of us happened to earn more money we’d talk about it but we were pretty relaxed. I think a lot of people when they set up companies together say ‘well what if I’m doing all the work’ etc. Wait until it actually happens because it may well not, it didn’t for us. Four years on it’s still fifty-fifty right Will? 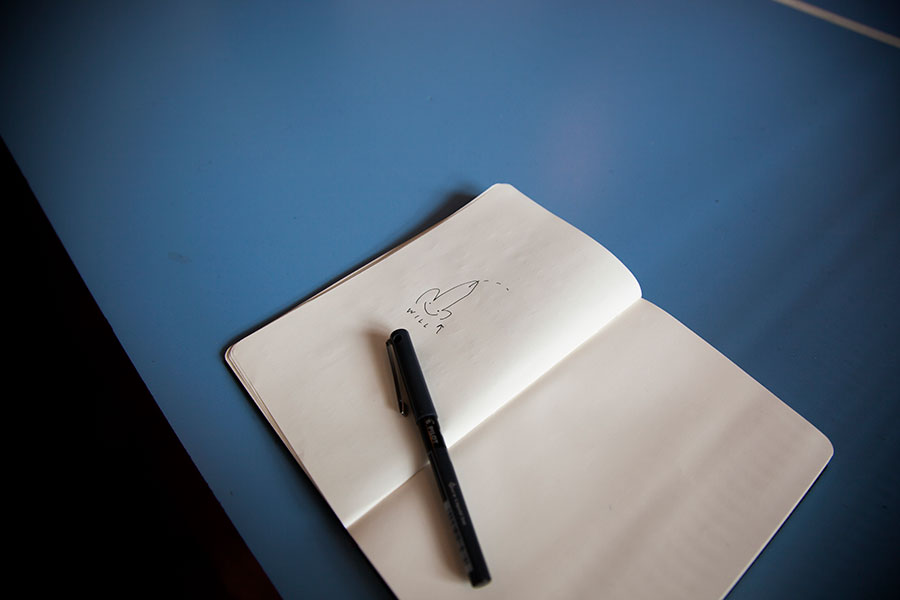 Alex drew Will, because he’s an illustrator

Will is now visibly annoyed. Alex had produced a long and impressively verbose answer with seemingly no adverse effects to his game. Clearly deciding that power would overcome, Will starts incessantly smashing every ball, with mixed results. 9-2 Alex.

So were you surprised when It’s Nice That became so big?

AB: Yeah of course! You never expect when you start a blog that four hundred thousand people will start reading it.

WH: We started it at a time when blogging was very complimentary - you’d get a lot of ‘via’ and ‘link from’ which meant we grew organically.

WH: No actually Simon Whybray registered @itsnicethat and ran it as an RSS feed for ages

WH: Yeah and I emailed him and asked him if we could use it instead and he said ‘yeah cool go for it’, gave us the password and off we went. It was really nice of him to do that.

Will, somehow, has hit some ‘good ones’, making Alex dive and grunt with his admittedly impressive returns. The crowd round the table is starting to grow, feeding off the restless energy of the ‘local derby’. 11-7 Alex.

Do you think It’s Nice That fuels copycat work?

WH: I think undoubtedly we’ve contributed to that discussion. But there’s a conversation that should happen more about where the line between ‘influenced by’ and copying lies. It’s been happening for ever, it’s just easier to find now with the internet.

Do you ever get frustrated that the It’s Nice That tone of voice doesn’t let you spill rage on the internet when you’ve had a bad day?

WH: One thing I’ve realised quite recently is we got very lucky with the name. It’s always put a positive attitude on anything.

AB: We can still critique stuff in a positive manner but we’re not there to put up bad work or blast people. We’re not like that, I don’t want to put shit stuff on the internet. The name has informed everything we put on there.

WH: We’ve worked hard to make sure the tone is accessible and all ego is removed. You don’t need to go very far to stumble across ego in our industry, we don’t want to be that.

Will appears to power up, serving well to win himself five straight points from his serve. He wasn’t to know they would be his last. Alex returns fire with a serve so fast it breaks the window. The barman looks up and tuts.

Do you never think ‘let’s just get rid of It’s Nice That’ and just run a straight up design agency?

AB: Ha no way. I see It’s Nice That as the sun - everything else would be dull without it. If anything else we look for things to add to it rather than take away.

AB: I actually agree with you.

Do you have plans for the future that you can tell me about?

AB: First and foremost always keep doing what we’re doing as well as we can. From the outside INT might feel established but from the inside we’re always trying to improve and make it better. We also have this mantra across the HB group ‘Make it better’ so hopefully the next thing we do will be about making the industry or the world around us a bit better.

Do you worry about putting something out that doesn’t live up to the INT standard?

WH: I don’t think there would be anything that’s dramatically under. What’s interesting about launching the magazine under a different name and the shop under a different name is that we can test it and make it it’s own without changing the perception of INT. I still think that the biggest thing we will do will be bigger than It’s Nice That. We publish to 400,000 people a month which is great but there’s bigger audiences to be had.

AB: The problem with Its Nice That is we will always be talking to a niche audience - if we can find something more universal and be nimble about trying new things then that would be great.

WH: The magazine is a prime example - we stopped the magazine in its old form because we evaluated what we needed from it and thought there was a better way. We’ve always been able to decide what to start and stop and we will always remain independent.

But with 16 people on the payroll, you can’t exactly shut down the blog eh.

AB: People say ‘isn’t it scary that you have to support all these people?’ I don’t think it’s scary, I get to work with great people every day.

The atmosphere is now, frankly, feral. Will has taken a second bat off the wall and is performing Darth Maul-like gestures and noises. Alex is now topless and has spread tomato ketchup on his torso like Bruce Lee. The Book Club has never been so full at 3pm on a Tuesday, thick with the smells of sweat, ketchup and testosterone. It’s jolly exciting.

So who would be your dream interview? Who haven’t you landed yet?

AB: It’s not always about people inside the creative industry - I’d love to talk to someone outside our world who’s got such a stance and made such a difference.

Finally, you guys have been put on a pedestal as ‘the graduates that did it’. Any pressure from that?

WH: Really? We don’t feel like that at all. The only time we notice our progress is Christmas. When everyone’s gone home and we’re the last in the office we can look around and say ‘oh there’s a few more computers on desks than there were last year’.

AB: For our events we always close the studio - everyone has to help lift bags and set up. Everyone’s stressed out in the day but at the end of those days when we’ve done it that’s the most satisfying thing.

Alex finally finishes off Will with a choke slam, breaking table in twain and releasing a shower of sparks that rises, meaningfully, to the heavens. Everyone takes a moment to think about what just happens, before lifting Alex aloft. There’s some confusion during which the crowd dissipates, leaving just Alex, Will and this intrepid reporter. The final score? 21-12. The victor, Alex.

Thanks for everything guys!

This article was originally posted in ShellsuitZombie magazine issue 4 in June 2013, which you can see here.