My mantra this week, as I become comfortable with doing lots of things I don’t know how do.

Well this week absolutely didn’t pan out how I thought it would. I achieved none of the things I was aiming to do this time last week. I got loads done though. I can’t work out if this reflects not planning well enough, not being disciplined enough about sticking to a plan, or just the nature of the beast (plans change). Regardless, I’m feeling positive about what I got through.

My plan was to wrap a bit more understanding and strategy around what I was working on, through interviewing folks, exploring revenue options and thinking about content marketing.

Now I read back over those goals (below) I don’t think they were nearly ambitious enough. What was I shipping? Too non-committal, not moving things forwards. Every week is vital at the moment and I need to be super disciplined about only working on things that really help me out.

Perhaps I knew this, because instead of doing any of them I got excited and started building an MVP.

Part of the MVP was shoring up progression.fyi to scale. I had found a dozen more progression frameworks and suspected more would come out of the woodwork so wanted to make sure there was a reasonable structure behind it. I ended up choosing Jekyll, a static site generator that I know like the back of my hand, rather than dipping into Gatsby or one of the react-based tools now available. We’ll see in time if that was a wise decision, but it meant I could rebuild progression.fyi and ship it in ~6 hours, with a few new bells and whistles. 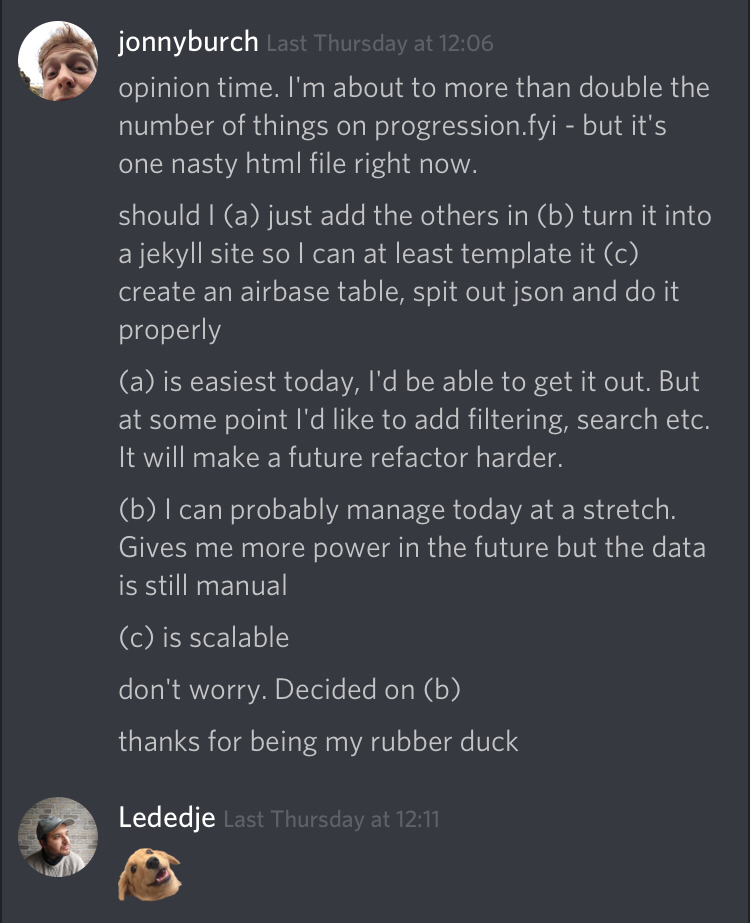 Here’s my chat to Miles, a good friend and rubber duck, deciding a course of action.

The other, bigger, part of my MVP is much more secret and behind the scenes. More on that later…

Goals for this week